I sat at my desk working on an overdue paper when a whooshing sound had me racing to the window. Maybe 20 birds had flown over the house and were still going. I heard a bang, and figured a dove had hit the back window. I ran to the back bedroom and looked out at the bird feeders. They were swinging, with not a bird in sight. Up I looked and there it was, not even double the length of a dove. The Cooper’s hawk, Accipiter cooperii, sat still in the naked pecan branches. Once, I actually saw one sitting on top of the bird feeder, no doubt wondering where all the birds had gone.

A Cooper’s hawk flew low over Newcastle as we walked home from the bus stop a rainy Monday afternoon. Was it ours? It is a month past the shortest day, and sometimes spring seems around the corner. Not today. Why do I like Cooper’s hawks so much? They are a city bird in some places, and have the long elegance of a Accipiter. You have to stare hard at them to make sure they are not a square-tailed sharp-shinned hawk. They are quieter than the heavy Buteos, the red-shouldered and red-tailed hawks that even nest on campus.

I could only easily find who this lovely hawk was named for on Wikipedia. It’s William Cooper, who mostly studied shells, and was a founder of the new York Academy of Sciences. It made me wonder if there are any birds named for women. Anyone know? So, a guy who collects shells, never publishes anything but gives his shells to others, and shoots one hawk and gets it named after him. Hmm.

But back to the lovely bird. It’s fine with me if it wants to eat some of the white-winged doves, house sparrows, or squirrels at the bird feeder. But I would prefer he or she leave the goldfinches and the red-bellied woodpecker alone. And by all means don’t touch the lovely Carolina wren, with the lovely song. The robins never come to the feeder, just sit in the pecan and look at it, so I guess Miss Cooper could have one or two of them. I do get to choose, don’t I?

My sister just emailed and said a Cooper’s hawk is still up there in Ann Arbor, feasting on morning doves. She hopes it doesn’t get the flying squirrel.

So, what’s the scientific community have to say about this stunning bird? There’s a paper about avian malaria, but I don’t have access to it, and my hawk sure didn’t look sick. Wow! Here’s a study that began in 1980 and reports through 2005 on the same birds. The work was done by researchers at University of Wisconsin at Steven’s Point, and they worked near that lovely campus. Why did they study only the males? Well, that’s what they did, and they banded them with color bands, and numbered bands. It turns out these hawks come back to breed at the same place year after year so the researchers could get an idea of that treasured variable, lifetime reproductive success.

A question is always good in biology, and comparisons make for easy questions. In this study, they compared urban and rural habitats, if compared to Houston, anything in northern Wisconsin can be considered urban. These busy researchers marked 192 individual males, something that was certainly harder than marking 192 individual female paper wasps, my specialty for marking. Mortality was about 19.3% per year and did not differ by habitat. Those guys that they had lifetime reproduction for numbered 66 and they had from 0 to 32 babies, averaging 8.5. Some studly guys, 15 to be exact, produced 53% of the 562 babies, and the longer a male lived, not surprisingly, the more babies he sired. Heavier guys did not live longer. The paper didn’t go into much detail about what it felt like to be out in the north woods summer after summer, beginning a decade before the current crop of undergraduates were born, braving blackflies and mosquitoes, and the talons of hawks, all to do this study. It also didn’t talk about any hanky panky, but other papers have indicated hawks are fairly faithful mates. Would you fool around on a guy with talons?

A group at Indiana State University looked a little more carefully at the mortality in the winter, and used little hawk-sized radio transmitters. They also looked at the females. Of 27 Cooper’s hawks of both sexes, 11 were adult and 16 were immature. No adults died. Three immatures met their ends on windows, and 3 were killed, 2 by an owl and one by something else. One Cooper’s hawk killed a sharp-shinned hawk. I’d have liked to see the hawk-hawk battles, or the owl-hawk battle. Actually, I wouldn’t have. Too gruesome. And the window or automobile deaths make me sad. The juvenile death rates are horrifying in this study, 91% for Cooper’s and sharp-shinned combined. It seems easy to be a hawk until you hear about all these death rates, and remember how the blue jays scream at them whenever they perch for a moment or two to rest their hawky bones.

I wonder how many Cooper’s hawks fly over Smith Point? This is a point out into Galveston bay that you get to from the Chamber’s county side. It may not be as famous as Hawk Mountain somewhere out East, but it is ours, and it is staffed with professional hawk watchers all fall. There is a platform there, one that survived all the hurricanes. It’s called the Smith Point Hawkwatch. I see that in fall of 2010 they got a total of 790 Cooper’s hawks flying over between 15 August and 15 November, and that the biggest daily count was 82 Cooper’s hawks on 29 September, when we were still in Copenhagen.

One of the things I love about biology is how interconnected everything is. Borrowing protection from something fierce is a theme in wasp biology. Some paper wasps, Polistes, nest near other wasps, or near fierce Azteca ants. You may not think wasps need protection, but they do, especially from army ants. I love to see the delicate nests of Mischocyttarus right by a much bigger nest of Polybia or something else. I hunted for a photo and failed. OK, what does this have to do with Cooper’s Hawks? Well, it turns out that there are birds that nest near Cooper’s hawk nests, according to a study by W. J. Duncan and Peter Bednekoff, at Eastern Michigan University, in the lovely sounding town of Ypsilanti, just east of Ann Arbor, not to be confused with an arbor. They found large cup-nesting canopy foragers were most abundant near the hawk nests, and small ground foraging birds least abundant. This fit with their hypothesis that the birds the hawks like to eat, medium-sized ground foragers, would be less common near the nests. Cavity nesting birds have the cavity for protection and so don’t need to be near the hawks. It’s a Hobbesian choice when it comes to nesting near a bird predator!

Now we’re having a major cold front, I wonder if that lovely hawk will return. When I got home the seeds were all gone, so our sparrows, doves, goldfinches, bluejays etc. found time to eat hawk free today!

High up in the leafless pecan tree sat the Cooper’s hawk. 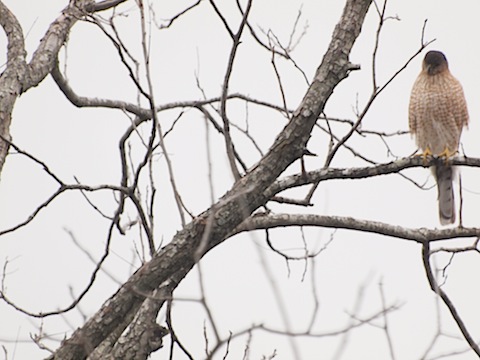 With my new 70-300 Olympus lens, and a lot of overexposure, we could see it looking down at my feeder. 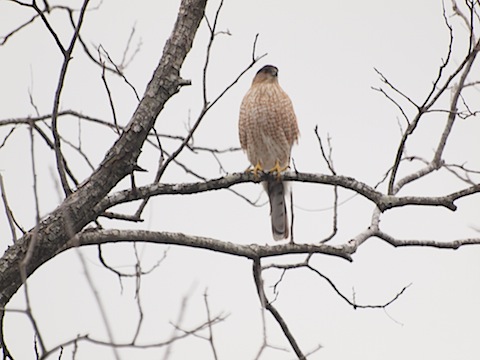 What a lovely bird! Help yourself to my white-winged doves! 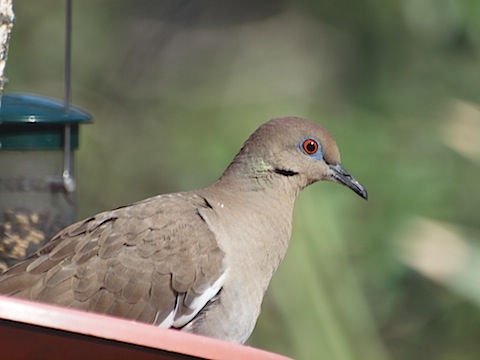 This white-winged dove got away!

The goldfinches weren’t very afraid. Maybe they are too small. 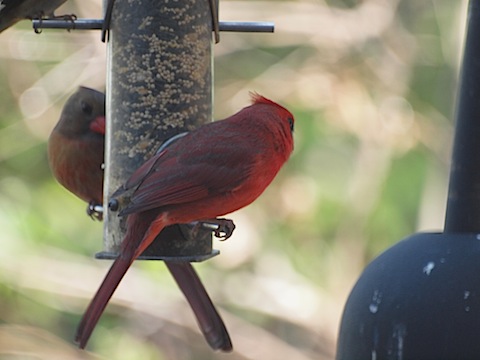 The cardinals flew off scolding and clicking.

Not so easy to get a perfect focus. These goldfinches are turning color! 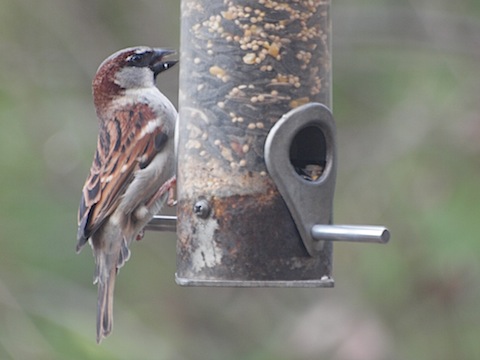 You could have this house sparrow, Mr. Hawk. 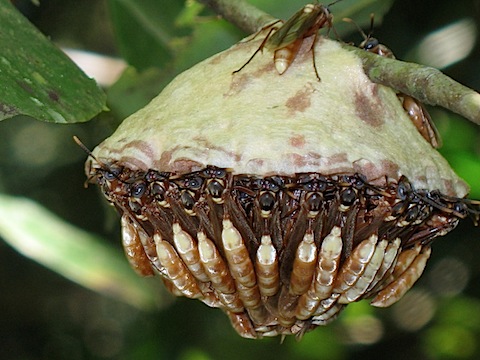 This is a lovely Apoica wasp nest from Tambopata, Peru. If you nested near this, you would be quite safe. These lovely girls hunt at night.

5 Responses to Does my bird feeder feed Cooper’s hawks?